Until approximately 2009, the information and data that was in the network was grouped in a base that was managed by a company or individual. Therefore, the owner of a database was a single entity. A few years ago, a new way of structuring the data was born, the Blockchain. Through this new structure, the information is grouped into blocks and distributed among several participants. Therefore, many users participate in the network and keep a copy of the database. Many users have the information or data, therefore it is impossible to modify the database.

This technology has begun to be applied in areas where it is necessary to make value transfers between two or more parties in an unsecured environment without intermediaries. For example, to make an election citizens can enter their vote online without behind a company checking the data. Another example would be to make monetary transactions between users without having a bank as an intermediary, among others.

It is a very recent technology, and in the educational field have appeared the first reflections of this technology to be applied in the centers. Antonio Bartolomé and José Manuel Moral have edited Blockchain in education, chains breaking molds. Possibly the first book, published in Spanish, about the applications of the Blockchain technology in Education. 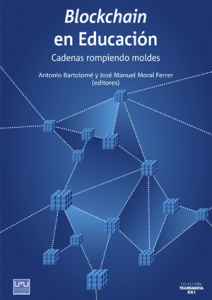 As discussed in the book, this new technology is not going to represent a change in the way we teach and learn as important as the implantation of the public school in the 19th century could be, but it will solve some problems, it will offer development paths to long-anchored ideas and will allow us to understand the future in another way.

It may also be that it generates changes in the most relevant actors in the education system. In the long term, it can contribute to democratization or liberalization, but it can also contribute to putting the system in the hands of companies focused on immediate profit. You can not predict a black future or a pink one. But something is going to change.

PhD in education and digital technology

Begin typing your search term above and press enter to search. Press ESC to cancel.